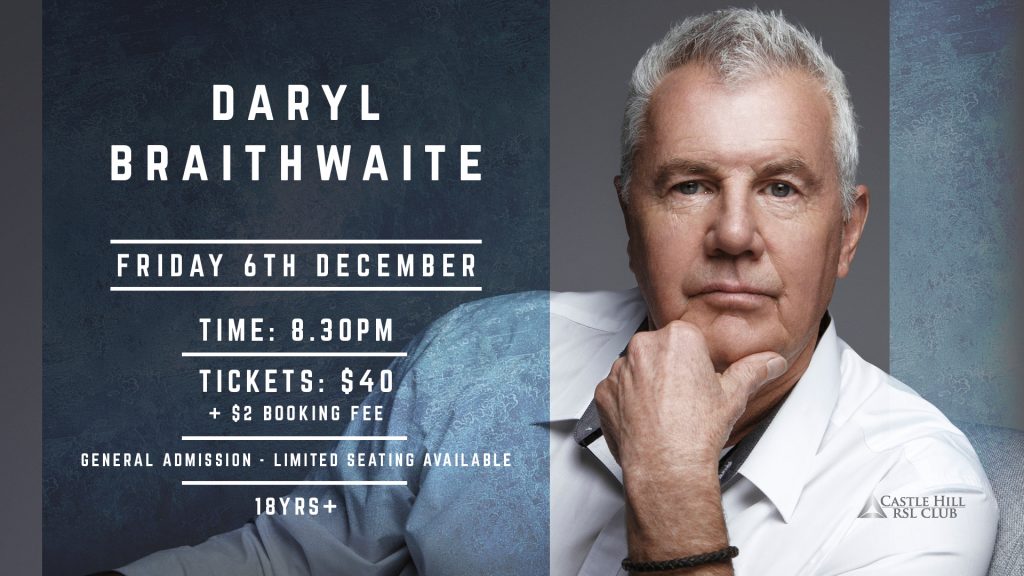 Daryl first found fame as lead singer of Sherbet, a band synonymous with the 70’s and their accomplishments during their long career were many. Between 1971 – 1978 Sherbet produced 20 national top 40 singles and were the first Australian band to top the $1million mark in album sales in this country, with a total of 15 albums and 30 singles to their credit, with songs like ‘Summer Love’ becoming the highest selling single of 1975 and ‘Howzat’ not only a hit in Australia, but also in England & America. During this period he won the Australian King of Pop award 3 times.

In November 1988 Daryl released the phenomenally successful album ‘Edge’ which spent well over a year in the national Aria chart, peaking at #1 for several weeks. In 1989 it became the highest selling CD in Sony Music Australia’s history, spawning 5 hit singles including ‘One Summer’, written by Daryl which went on to achieve gold status.

In November 1990 Daryl released his follow up album ‘Rise’, Daryl again proved that he had what it takes to make an album work and both the critics and public agreed. Rise boasted a further 5 hit singles. The most popular was undoubtedly “The Horses’, holding the #1 position on the national charts over 3 consecutive weeks. The unexpected success of this single led to being voted “Australian Song of the year’ at the 1991 Australian Music Awards.

Live the formative and flowing years of Australian Music with Daryl Braithwaite who is known for teen hysteria, international breakouts, multi platinum albums, extraordinary collaborations, performing at the sweatiest dives and some of the worlds most famous stadiums. Daryl Braithwaite remains an integral part of the evolution and development of Australian popular music and a must see live on stage.